And Away We Fete!

It's been a crazy couple of days here in the Collines, wrapping up my site visit and celebrating the annual Yam festival.
On Wednesday, we spent most of the day catching up with other volunteers in Galzoue for market day. Mama Ahovi made us burritos for lunch and we got some shopping done to bring food back to people in village. Lindsay was hosting two volunteers from Ghana who were here on vacation, so I toured them around the market. They were particularly interested in our tissu and the fetish market, which has everything from animal  heads for voodoo festivals to wooden dolls to ward off bad spirits. I was patticularly happy when I found a cold caffeinated coffee in the one store with a large refrigerator! 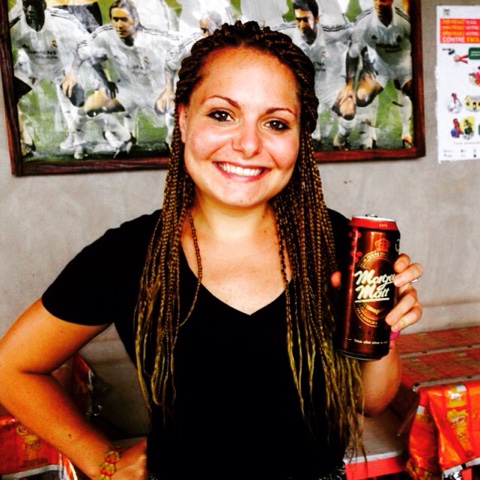 It was a rainy start on Thursday, but we had promised to bring the Ghanaian volunteers to climb a Colline, so we set off for Kpakpa where Amanda agreed to escort them around. Since it was wet, they did the same little nature walk we did, but the view was incredible none the less.
While they were hiking, Lindsay and I sat down to discuss an action plan for Adourékoman. Since I am replacing a volunteer, I want to ensure that all existing projects continue to be monitored and that I don't redo work she has already completed. We came up with some great ideas and I can't wait to get to site to start implementing them!
We were invited to Vincent's house (Amanda's homologue) for lunch and ate our body weight in soja and manioc. It was delicious. I think my taste buds are finally adjusted to the Beninese amounts of pimante in each dish.
When we got back to Adourékoman, I met with a carpenter to discuss the changes needed in the house before my arrival. Due to some termite issues, I need to replace both doors and the door frames and install new screen windows to comply with Peace Corps policy. Luckily Fortune and Daniel both know what needs to happen so I have some faith that it will get done before I return mid-September.
After packing up my mosquito net and grabbing a change of party clothes, we hopped on motos towards Savalou to attend the annual yam festival. Savalou is the capital of the Collines and about an hour away by the terre rouge. Although the actual festival is the 15th (Le quinze Aôut), this was a special year. The king of Savalou, who blesses the beginning of the yam harvest, died recently, so this year was marked by the coronation of a new king. We were unsure what time this was happening on the 14th, so we all went a day early just in case. 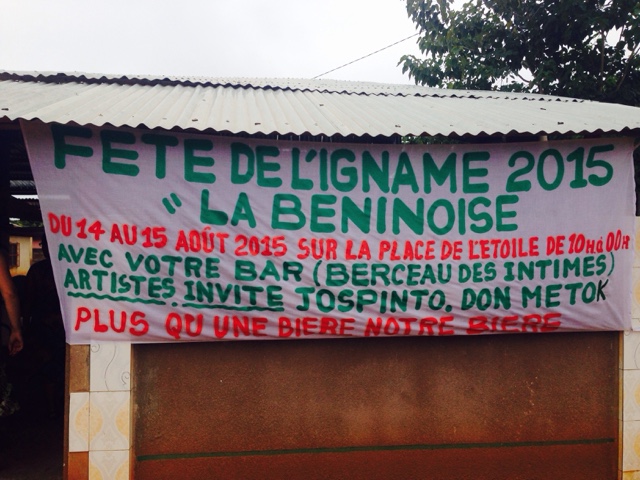 On of the beauties of the Peace Corps is that we are all one big family. We got to Savalou in time to make dinner (sweet and sour okra!! Stay tuned for a recipe for this great one pot meal!) and crash at Rob's future house that has become the host site for anyone passing through. It was a warm night so we dragged a mattress into the courtyard, set up our mosquito nets and slept under the stars. 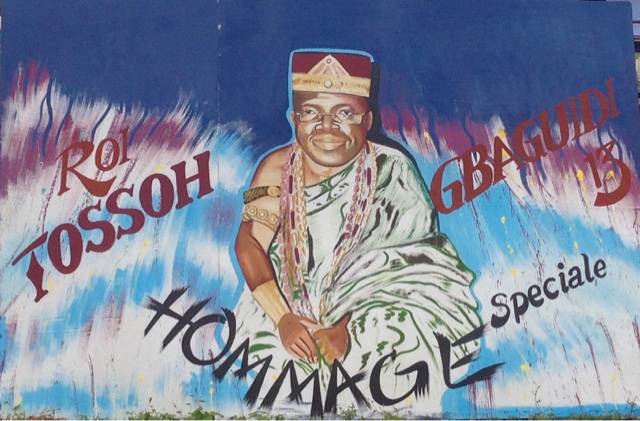 Still unsure on the timing of the coronation, we woke up on Friday to grab breakfast at a local cafeteria (they had yogurt!!) before heading towards the king's palace.  The streets were bustling as people arrived from all around the country to attend. Long lines of women were marching in traditional voodoo ceremony apparel blessing the area and chanting. 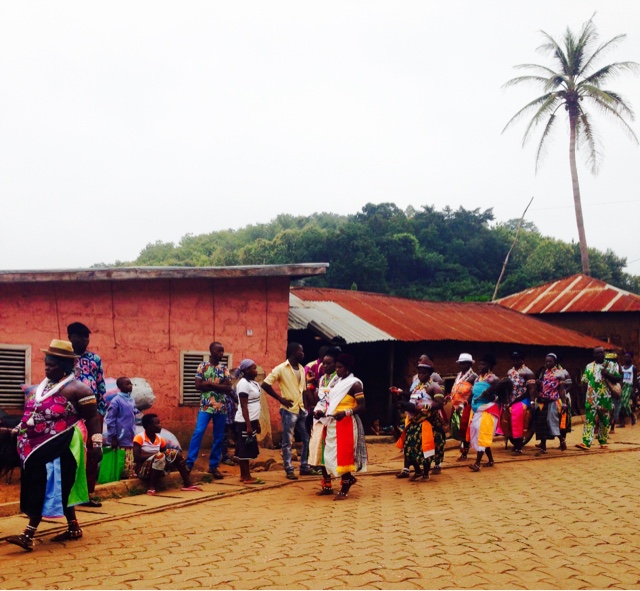 When we got up to the palace, there were only a couple occupied seats, so we decided to walk around a bit more. We ended up at a local buvette allied Merci pour L'Amour, and caught up with a few other volunteers and yovos that we had met. No one, even the locals, we're sure of the start time, so we walked to Nadege's house where we had been invited for lunch.
Nadege is the midwife for the main health center in Savalou, but was recently tansferred from a smaller town in the west of the Collines where she was the supervisor of a current third year volunteer. Since moving to Savalou, she has gotten married and now lives in a gorgeous new house with her husband, Alexander, and their kids.
In true Beninese fashion, her hospitality was amazing. She had a full bar cart set up and had prepared an entire buffet of food. While it's a huge fashion faux pas in the USA to wear the same pattern or outfit, meme-tiss (same tissu) is all the rage. Lindsay and I had arching outfits made for the festival (and one for Daniel so we can all match in village) and we presented Nadege with some of the fabric. She was thrilled! 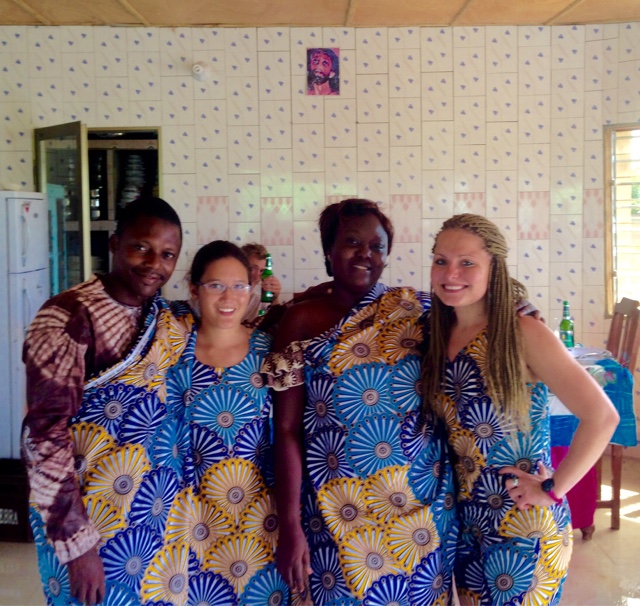 After our late lunch there, we ventured back up the hill to check on the coronation ceremony. It still haden't started, so I decided to head back to Adourékoman before dark. The logistics of all this travel was complicated, but Fortune's daughter, Tatiana, was being Baptized at a special mass on Saturday morning and I had to attend. It turns out that the coronation happened minutes after I hopped on a moto, but so it goes. At least I tried!
I got back to village after an eventful moto ride (the chain broke in the middle of nowhere along the terre rouge, but many people stopped to help us and fetch a mechanic) that took over 3 hours to get home. Exhausted, Daniel invited me over for a late dinner and cold beer; he truly is superman!  By the time I got my net up again, I was ready to crash.
Saturday morning was an early wake up for a supposed 7 am departure for the church. When I rolled out of bed to an empty house at 6:40, I realized there was no huge rush... Welcome to Benin Time (BT). We finally left the house at 7:45 and Lindsay, who arrived by moto that morning, met us at church. 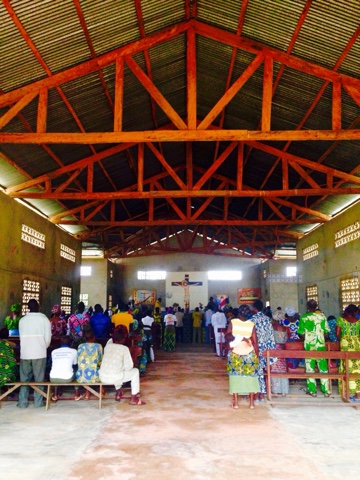 Like the last masse commande I attended, everyone in the community was invited and since there was guaranteed to be food afterwards, there was a good crowd. The mass was conducted in Idaasha and 12 babies were baptized on the steps of the alter. Lindsay and I were invited up to take pictures of all the cuteness! Since I have actually never attended a baptism in the USA, I can't tell you if it was different, but everyone was happy and even the babies held it together. 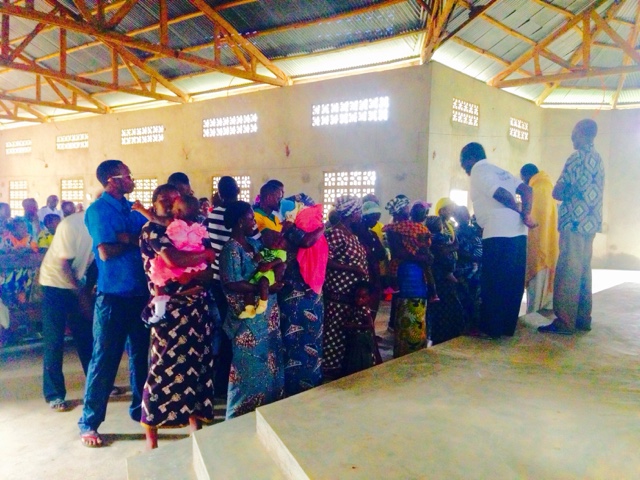 After the baptism, Lindsay and I were invited back to Fortune's house to continue fete-ing. We were given a huge bowl of rice and another of spaghetti. We also cracked open a box of sangria to celebrate the occasion. At this point, my camera died, so you will have to wait for Lindsay to send me pictures from the 20 minute photo shoot we had with the babies, my host family and everyone else who wanted a photo with us. (I do have one of us though!) 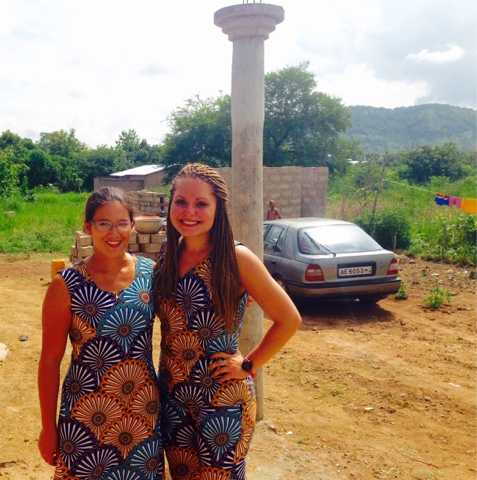 After the meal and a village tour to say our goodbyes, we caught motos to head back to Savalou for the real yam festival. I had all my baggage with me and Lindsay decided to go meet her Ghanaian friends in Cotonou, so I went straight to the house to drop everything off. I met up with Caitlin, a volunteer who is completing her service in two weeks (!), who wanted to go visit Nadege. I called and we were invited to yet another meal.
After finding Nadege's house, 15 minutes down a long dirt road, it became clear that the meal was actually a party at Alexander's familial house. Caitlin stayed for a drink before leaving for another event, but I decided to stay with the family and celebrate Ignam Fete in true Beninese fashion.
We loaded up two cars of various family members and drove up the hill towards the King's palace, where Alexander's family lives. The house is built into the side of a Colline and we hiked around, getting an amazing view of all of Savalou. The woman brought out pre-boiled ignams and began the process of making  Ignam pilé. The ignams (like yams) have a starchy consistency and are pounded in a knee high mortar with a long wooden pestle until they are like a sticky mashed potato.  Pounding is usually done in sets of two or three people, with each one throwing down their paddle to mash the Ignam.
We set out mats on the terrace and both the men and women ate from communal platters. This was by far the best Ignam pilé I have tasted so far and it's even better when you eat it with your hands! We capped off the meal with a bottle of red wine and then packed up to go visit the palace.
The palace was crowded with people watching a voodoo ceremony to bless the spirits of the dead, but we couldn't get close enough to really see what was happening inside the circle. We actually left quickly after one person became possessed by a fetish and the kids panicked. And I can understand why! More on voodoo and my experiences with it so far later.
Like most American festivals, the Ignam fete also has a huge open market and music stand at the local fairgrounds. I joined the family as they drove down there to explore the stalls filled with fake jewelry, ointments that promise to have magical properties and other fair wares.
Seven hours after heading to Nadege's house, I finally got back to the PC house in Savalou. Everyone else was getting ready to sleep and preparing for our early departure to our respective training sites today. I was lucky and got to travel back with two other volunteers, which makes navigating and negotiating much easier.
The three of us met at the bus area at 6:30 this morning hoping for a 7 am departure. We finally pulled out at 7:40, with 23 people in a mini bus that clearly seats 18. The trip to Bohicon was rather uneventful and when we arrived at the terminal, we weren't swarmed by drivers like we were on our way to post. Like seasoned volunteers, we found a taxi heading to Sé, negotiated down from the yovo rate and sat around eating avocado and baguette sandwiches while the driver searched for other passengers.
We left the terminal with 6 passengers plus the driver and a trunk that was tied down with a bungee cord. (We didn't join the Peace Corps to be comfortable!) Despite a couple drop offs and pick ups along the route, we didn't have any problems and I was actually thrilled when I pulled into Sé and started down my dirt road towards home.
While it was sad to leave Adourékoman and my new friends there, I received a running-while-screaming-then-tackled welcome from Eddy and Jean Eudes who has just started walking!! I'm excited to kick off Technical training this week and can't believe that we are only 5 weeks from becoming real Peace Corps Volunteers!!
Posted by Carly Jacque at 3:06 PM