Beninese people love music. In fact, I'm convinced they enjoy noise, at any decibel.  When it's paired with dancing, drums and alcohol, it's a party.

Under this rhetoric, Adourekoman parties all the time. Despite large planned events however, like funerals, one of the regular gatherings is the Sunday night tam tam circle in Okouta. 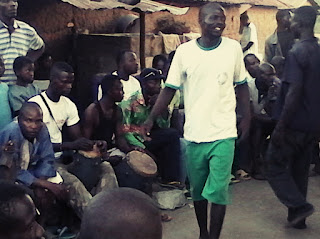 I may have not mentioned this before, but Adourekoman is actually two villages.  The first is Okouta, the second, and larger, is Adourekoman. The latter contains the church, school and health center.  There isn't really any difference between the people of the two villages, as they kind of seamlessly flow from one into the other, but on tam tam night, village loyalty comes out and the youth (technically anyone who's not an elder) from their respective villages participates in could be best described as a sing and dance off. 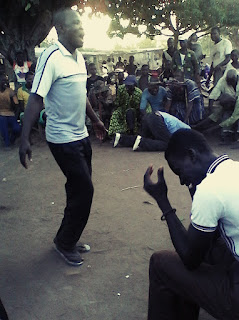 Yesterday's event started around 5 and I actually have no idea when it ended. When I left at 7, it felt like it was just getting going. A friend had found me a seat next to a man sporting a NY Yankees hat (I decided he was on the other team though I never actually asked), and had a great view of the circle. 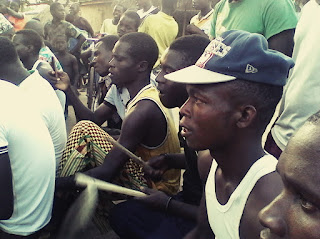 On one side sat the elders, who were always served alcohol from each new bottle first. They didn't sing or play the drums, but instead acted as if they were holding court. If they disagreed with something sung, they would bang their canes on the ground to interject. When dancers came into the circle, they paid their respects by bowing at their feet (there is a photo of this below). 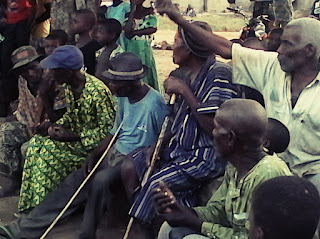 From what I was told, most of the songs last night were about a theoretical hunt, where each village was prophesizing the size of their potential kill. It ranged from large birds to cattle and other animals that could not be translated into French for me.

At one point, I was invited into the circle to dance. I accepted and entered as the only woman. They laughed and applauded as I did my infamous booty shake chicken wing dance. I'm unsure whether women are normally allowed to dance in the circle, but I was the only one. Women stood on the outside of the circle, with their kids, clapping and singing, but seemed to play an auxiliary role in the men's game. 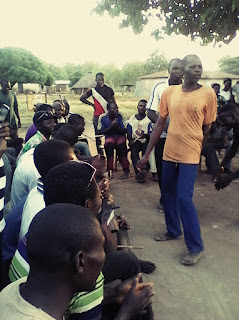 So, when people ask what do you do when you don't have electricity, here's one answer. We hang out together, tell stories, sing songs, and enjoy the company of others. Sounds like a radical concept, or something reminiscent of summer nights by the campfire, but I love it.

(So log off your computer and go enjoy some tech free time with the people around you!)
Posted by Carly Jacque at 11:32 AM