How much time have you spent thinking about where your food comes from? In school, I was exposed to Fast Food Nation which triggered a very brief stint of vegetarianism in my early teens. Growing up in a New England suburb, we had a small vegetable garden in our backyard which sometimes produced a few cucumbers, peppers or cherry tomatoes. For everything else, there was a grocery store down the road.

I never really thought about food access or availability until I got to Benin. If I wanted fruit out of season, I could find it. If I was trying out a new recipe with a unique ingredient, there was a specialty store in driving distance. Never have I modified my eating habits to the season.

And then I moved to Adourekoman. While some members of my community have secondary jobs: tailor, hairdresser, driver, etc. everyone here is first and foremost a farmer. The Collines are lush, with fertile soil that allows for great crop diversity, although the success of all farms depends on the rainy season which has been dismal this year. My village is surrounded by fields of corn, sorghum, soja (soy), cotton (the white puffs are in bloom now and are quite beautiful), peanuts, beans and vegetables that include pimante peppers, tomatoes, onions and okra. The Collines are also the number one producer of cashews, so during that season, you can access both the fruit and the nut.  If I haven't listed something above, there isn't access to it here, and during most of the year there still isn't access. Clearly diversification of the villageoise diet is a huge task and something I will try to tackle over the next two years. It is also important to note that life here revolves around the harvest. In fact we've had significantly decreased attendance at vaccination days because everyone is currently harvesting their beans and soja. It is a vicious cycle but how do you prioritize between eating your next meal or preventing polio in the future (I realize that's a grave comparison but hopefully you understand what I'm getting at.)

In my attempt to understand and integrate into my community, I decided to head to the fields last week with Daniel's wife. They have multiple different plots of land and this week they were picking beans in a field about 3 km from the village center.

I've always known that farming it hard work, but can now attest that a day spent bent over picking bean pods under the heat of the African sun is laborious. While the sun is essential for drying the beans, all I really wanted was a shade tree and something stronger than SPF 55.  Next time...

The beans that we were picking were planted in June. There are actually two harvesting cycles for beans here as it is a staple food in the diet. Attasi is a national dish composed of rice and beans and here in village they cook a mixture of beans and corn kernels which is also delicious.

When I got to the field around 8, other women were already hard at work.  Each had a large metal bowl and was picking the beans in rows across the field. I added my backpack to the pile of belongings and started to pick. While its hard work, its mindless and I honestly enjoyed moving down the rows pinching the dry beans off their vines. The women sang while they worked so the silence was filled with spiritual chants from a half dozen different voices. (And I say spiritual because Jesus sounds like Jesus, even in Idatchaa). 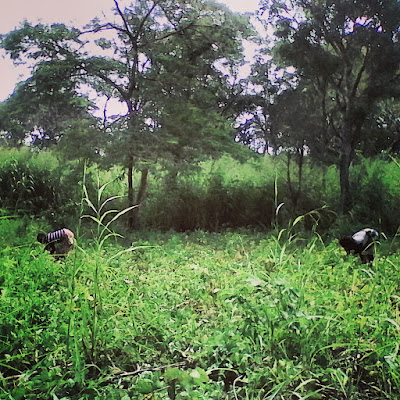 I picked for 4 hours before Daniel's wife insisted I take a break in the shade, and play with the restless baby who no longer wanted to be tied to his moms back. We sat on the edge of a tarp that was being used to collect all the picked beans and enjoyed some oranges that I had packed. After a half hour it was back to work. 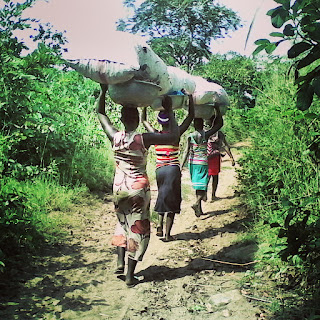 Word spread quickly in village that I helped harvest Daniel's field. Women have stopped by to ask when I'm available to help them and some still don't believe that a yovo knows how to farm (I don't but they don't really need to know that).  Mostly it has given me village cred, which never hurts.

Having brought the beans back to village, we stored them in Daniel's cooking shack overnight. The next day, we spread them out in a thin sheet on a large tarp and stood watch for hungry goats/sheep/chickens who came grazing as they roasted in the sun. In the late afternoon, the women took large palm fronds and beats the beans to break open pods and release the seeds. This was a long process and it left the area scattered with bean pod carcasses. The last step was to assure that the beans had all been separated and picking out spoiled beans which was a tedious but social task. 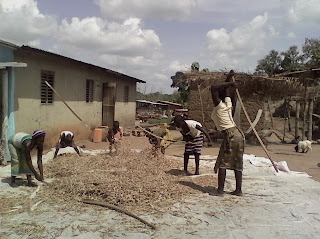 So now I understand where beans come from. Or at least the white beans that I eat here. And while I don't have any future plans to head out to the fields, I'm one step closer to comprehending village life and the daily routine of my fabulous community.
Posted by Carly Jacque at 9:00 AM