The holiday spirit has taken over Adourekoman! Everywhere I go people invite me to celebrate Christmas with them, offer me food or just wish me a Happy Holidays!

Although Christmas doesn't officially start until tonights midnight mass, preparations have been in full swing all week. On Tuesday night, I helped some women make Christmas cookies, which, like most Beninese foods, were deep fried slices of sugary dough. The Wednesday market in Glazoue was busier than I had ever seen it, with people stopping to pick up goods on route home and vendors filling their stalls with more merchandize than could ever be purchased.

In addition to the general excitement about Christmas, its the end of the cotton harvest here. The entire church yard is littered with heaping piles of fluffy cotton, giving it the appearance of snow mounds in a deserted parking lot. The villagers have been weighing the cotton on a large scale and each day a new truck comes to haul some away to a storage facility in Glazoue. Its quite the sight.

On Wednesday, I couldn't resist the temptation to throw myself into one of the huge piles. This started a full-on cotton jumping party which eventually progressed into an African snow ball fight. Its these moments of pure joy that I savor most. 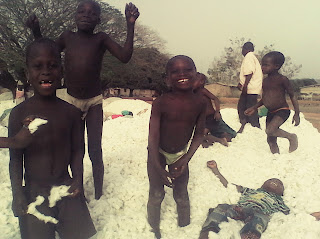 Gift giving, although a huge part of Christmas celebrations in the States, is reserved for children here in village, and apparently the Peace Corps Volunteer. I returned home yesterday afternoon to a squealing boar parked on my stoop. Its arms and legs tied together with strips of mosquito net (see what I have to fight in the battle against malaria?!), the poor thing wiggled down the cement, coming to rest in my sandy front yard. Merry Christmas Charlotte.

Unsure what to do with the beast, but quite certain it would become dinner over the next several days, I walked over to my neighbor to inquire what I should do with it. Almost positive he had no idea what I was talking about, he walked away, only to return moments later with a stainless steel bowl and very sharp, yet somewhat rusted, machete. I played a little game of consistently refusing the machete before Mr. Neighbor finally got the hint and took the boar and the blade to his yard.

At this point, we had garnered quite an audience. Without hesitating, Mr Neighbor (whose real name is Intelligence,) straddled the boar, lifted up its snaggle-toothed mouth and sliced its throat. I gave a little scream as blood gushed out, pouring into the bowl below. Although it was dead, the animal continued to thrash for another couple minutes, as life spilled out of its body. Another butchery experience in the books. 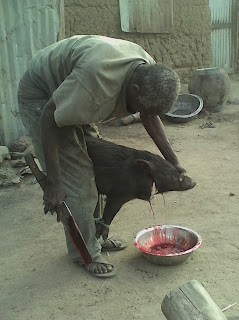 With the gruesome part over, I hung around to watch a couple men chop up the carcass, clean the entrails and discuss who would get which choice pieces of meat: the eyes, tongue, lungs, liver, brain etc. Having taken a seat between the carving and the roaring fire, I helped salt the meat and tend to a brewing bowl of blood and inner organs.  As the guest of honor, I was expected to eat the first serving of congealed blood accompanied with a hunk of spongey liver. I took a bite, swallowed it whole and passed the bowl to the next person.

In an attempt to avoid consuming more mystery pork, I bee lined it to the health center to say goodnight to Daniel before heading home. Twenty minutes later, having just brushed my teeth, there was a knock at my door and a small child delivering more pork. I took the dish, said thanks and ate a couple pieces before treating wowo to a pork fat feast.

I'm really excited to celebrate Christmas here in Adourekoman this year. From what I can tell, its going to be a weekend of food, sodabi and lots of dancing. And, if I'm lucky, maybe even more meat!
Posted by Carly Jacque at 4:04 PM