Of you don't count the time that we visited my uncle and had to endure a meal of extremely burnt deep fried turkey, or at least that's what he claimed it had been, I've never really celebrated Christmas. Sure I've attended holiday parties and even a couple Christmas Eve celebrations, but that's been the extent of my participation. As a Jew, Christmas always means Chinese takeout and a trip to the movies.

This year, Christmas was going to be different. I decided to stay in village and celebrate with my community there. I've already blogged about the preparations, the gifted boar and the excitement leading up yo Christmas eve. I had no idea what to expect.

The official partying started with a 'midnight' mass on the 24th that commenced at 10:15 and was over by 11:05... Can someone explain midnight to me?! The service was mostly singing, conducted by a local leader in Idaasha and took place in our candlelit catholic church. It really was beautiful.

I woke up on Christmas morning to wrap gifts, enjoy a leisurely cup of coffee and find out what time mass was taking place. At the market, I had bought pairs of earrings for all of the women who help me in village: send me food, do laundry, carry water etc. For the kids, I bought Angry Bird themed toy watches and NASCAR race cars. For everyone else, I stocked up on lots of bubble gum. With each item carefully wrapped in silver foil and tied with a bow of dental floss (PCVs get creative,) I headed out to wish everyone a Merry Christmas.

The young girls were thrilled with the gifts and it felt so good making them smile. It was just a tiny token of my gratitude for everything they do to make Adourekoman my home. The kids jumped at the watches and cars, and everyone wanted a piece of sugary gum, even though it was still early morning.

I headed back home to shower before mass, which was supposed to be at 9. Since it hadn't started by 10, I felt no rush to get to church and stopped by several houses on my way, acquiring a baby in the process.

Church was conducted by a priest from Glazoue and lasted a little over an hour. There was dancing, singing by both the chorale and youth chorus, and lots of gifts for the church leadership. When church let out at noon, everyone poured out, heading home for Christmas feasts.

Committed to bringing my own contribution to the meals, I rushed home to bake some chocolate cupcakes. Somehow I managed to come up with a recipe using jago powder (like swiss miss), but didn't take into account only being able to fit two cupcake cups in the dutch oven at a time. Fast forward 36 cupcakes and a couple hours and I was back outside, delivering baked goods and settling in for a communal meal of rice, spaghetti, ignam pile, akassa and too many sauces to count.

After making the rounds to a couple different families, I went home to nap quickly before going to Zaffe with Daniel to celebrate with the major there. We finally left village at 6 and enjoyed a heaping serving of chicken and beers with his family and some friends from his village. 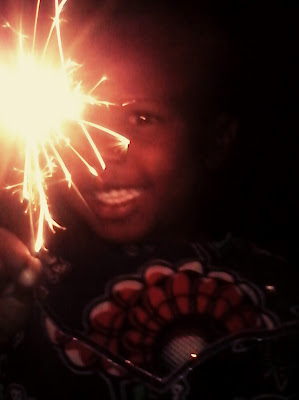 By 8:30 we were back in Adourekoman, sufficiently stuffed and exhausted from a day of fete-ing. I called it a night and headed home to a stack of dishes and an attention seeking cat.

I woke up on Saturday to head out with the village chief and a bunch of children to a Christmas event on Glazoue. It turned out to be a 7+ hour ceremony sponsored by one of Benin's 50+ presidential candidates. He had invited over 1000 kids to receive a meal and gift. Although the event kicked off with pizzazz, despite starting 3 hours late, it started to when the Santa parade forgot to show up on time, making an awkward entrance during an important speech.

Gift giving was on an individual basis, but after child number 200, the rest became restless and chaos ensued. Eventually all the gifts were handed out and we were able to continue home, albeit 5 hours late.

On top of the Santas, people clamouring for time at the mic, and a dancing tam tam troupe that made impromptu appearances, there were about a dozen traditional voodoo fetish dancers popping in and out of the tents. As the only yovo on the crowd of thousands, I was an immediate target for their attention and after a while I abandoned my front row seat for a more protected, a shaded, chair towards the back. 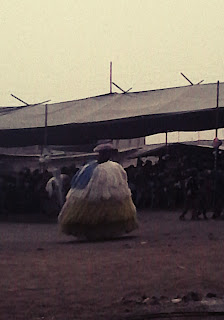 In all, my first Beninese Christmas has been quite an adventure. And for some reason, I sense that its still not over.
Posted by Carly Jacque at 9:00 AM