I've had a lot of "ah ha" moments here in Benin. Simple things like learning what cashew fruit looks like to more significant discoveries about human relationships and life in a rural African village. Despite everything I've learned, the moments I've treasured the most are those when, as a teacher, I can watch the evolution of comprehension.

When I started my English club this fall, I had all intention to keep it fun, upbeat, yet educational. I opened my doors to any students that wanted extra help with homework, regardless of the subject matter, and they poured in. After reviewing the same material with a particular student three nights in a row, I was convinced that he was more interested in spending time chez moi than actually learning the material. I relocated and changed my open door policy, limiting it to after 9 am and before 10 pm (many kids kept telling me they came by for help but I didn't answer my door. When asked what time they came by and they responded 5 am, I just laughed!)

While I can help with English, math, science and much of the Beninese curriculum, there are a couple subjects that I've really had to think about before launching into with any sense of understanding. One of the biggest surprises was the English curriculum in Terminal (equivalent to our senior year) that focuses on racial segregation and the Civil Rights Movement in America.

For the past couple months, I've been helping one student trudge through reading comprehension exercises that touch on racism and segregation. At first, I assumed he understood what the terms meant and spent more time breaking down the arguments in the exercises. When he asked me, after many hours, why this matters when people can just choose to change their skin color, I was aghast. Did he really think that the lotions marketed to tint skin tone can change the way you are perceived by society? When I asked him whether he knew about the slave trade, of which Benin was a huge player, he gave vague responses. He didn't know. Perhaps ignorance truly is bliss.

I'm not writing this to critique the educational system in Benin, but to prove that determination and Socratic thinking are essential to understanding. I walked the student through history, holding his hand as we started with colonialism, moving onto slavery, racial segregation and the problems that exist today. What began as a simple request for help with English opened the doors to a much bigger, and more important discussion, about the world we live in: where we've been and where we're going. Without that foundation, the English is pointless, secondary.

After ranting for a while (so much so that he hasn't asked for help since) and bringing in Daniel for help, I think the student finally grasped what the concept of racial segregation actually meant. Or at least he had a better understanding of how it relates to his life.

All my effort came to fruition when the English (and American Culture) club met last Sunday to celebrate Martin Luther King Jr Day. I started by explaining who he was and why he was so important. My student raised his hand and added that this is how racism manifested itself. Ah-ha!! He explained that the Civil Rights Movement fought for equal rights and cited Rosa Parks' bus boycott (a verb we added to our English verb list and the topic of a prior reading comprehension exercise) as an example of peaceful protest at the hands of racism.

After translating MLK's "I have a dream" speech, each student received paper to write down their own dreams. They ranged from visiting America to learning to speak English well and having western infrastructure here in Benin. While they didn't question the task, I challenged them to think creatively and dream big. 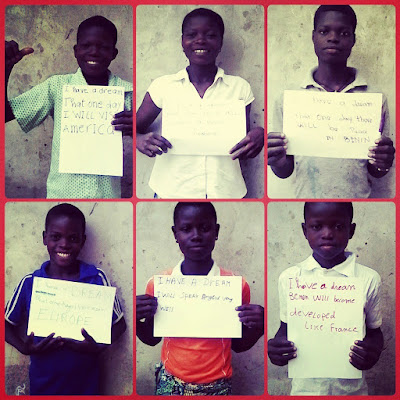 My impact here may be small. Sure, fewer kids will fall sick with malaria, some families may improve the nutritional value of their daily meals, and students may even succeed in English. While these are all important to me, I want people to ask questions. I don't want things to be taken at face value. I want kids to understand the why, how and what of the world.

The children of Adourekoman have a herculean task in front of them and the power to change how their community fares in the future. My goal is to teach them how to lead those lives, fulfill those dreams and remain resilient and determined in the face of failure. I have a dream.
Posted by Carly Jacque at 10:14 PM