The good, the bad and the (b)ugly

After a week of training, I got back to village on Monday to a bunch of news. I'll start with the bad stuff:

First, my cat Wowo ran away/was eaten/got lost while I was away. Daniel was devastasted that he had disappeared in his care, but I assured him it will be OK. Maybe he'll turn up, maybe Benin will win this time.

Second, our village chief is still in a coma.  He was going to have tests done in Cotonou, but the hospital didn't have space/didn't want to accept him. Sabine was in Cotonou then returning back to Abomey where he has been for the last two weeks.  Although they keep saying that he gets better every day, I find it hard to believe. This is the first time I've seen Beninese people be truly optimistic about a terrible situation. While Sabine and the Chief remain in Abomey, their children have been absorbed by the village. His second wife has stepped forward to care for Sabine's kids. I hope that this tragic accident has a happy outcome, as he supports a large family and many kids who are bright and deserve the education he has provided them with.

Thirdly, a child died over the weekend from a snake bite. While this is also devastating news, it was a reminder that snakes are out there (and we all remember how I fee about that!) There have also been an increase in scorpion bites and stings arriving at the health center. So, here I am... Constant vigilance.

Fourth, while you are all probably aware of the Zika crisis in South America and more recently in the US, we are currently dealing with an outbreak of Lassa fever. All volunteers have been asked to stay out of their health centers and away from sick people. I assure you not to worry, we are all safe, and peace corps is monitoring the situation very closely.

And on that note, here are some of the awesome things that make it worth getting out of bed in the morning:

Lindsay and her friend Valerie came to visit village this weekend.  We got to tour market, enjoy Maman's ignam pile in Glazoue (arguably the best in Benin) and spend some time in Kpakpa, Amanda's old village, with her homologue Vincent.

Did you know that Benin is one of the world's leading producers of cashews? Well, cashew season has just started and the trees are full of cashew apples and the rich and crunchy nuts. I didn't know that cashew apples were even a thing, but the fruit, which is highly perishable and fairly astringent, is a great source of vitamins and other essential nutrients. Unfortunately, many people don't like the taste, but I think they're delicious and will do anything to get my hands on some fresh fruit. While you can buy cashew juice here, I'm going to experiment with some dried cashew fruit, syrup and maybe even a cake! Recipes to follow! 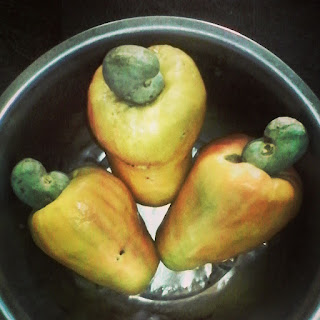 Rebecca and I kicked off a successful mosquito net distribution campaign yesterday and will spend the month of March doing behavior change sensibilizations and distributing over 300 nets. With the hot season looming before us, its critical that people continue to sleep under their nets. The mosquitoes stop at nothing!

On Monday, I leave for another two weeks of training.  The first will be one week with my Amour et Vie team, who will learn how best to serve as health peer educators in the community. I'm really excited to be working with Joseph and Elizabeth, who are both ecstatic about visiting and traveling to another part of Benin.

The second week of training will focus on Water, Sanitation and Hygiene, or WASH. We will be learning about Community Led Total Sanitation, a program that I worked on in Laos, and how to implement WASH activities in the schools. With all the health problems going around, its critical that people practice good hygiene, such as hand washing and latrine use!

It will be a fairly quiet weekend here as I play catch up with my village friends and get ready to leave on Monday. Stay tuned for  some recipes and updates from the field!
Posted by Carly Jacque at 9:58 AM