I did everything I was supposed to do. I cleaned the litter box, I let him roam free around the house, I deboned fish so he wouldn't choke and I splurged on hard boiled eggs for a protein supplement. And yet, I've lost another feline friend to the African wild.

Mulligan, who came into my life in February, was my second chance at Peace Corps Pet Motherhood. For those of you who don't remember, my first cat, Wobleoh (Wowo to all that knew him) moved with me to Adourekoman in August after my host family realized that they really couldn't have a cat in the house. Wowo stayed with me through my three months of post integration, travelled in my lap to trainings and kept my house free of creepy crawlies and other nasty local fauna. 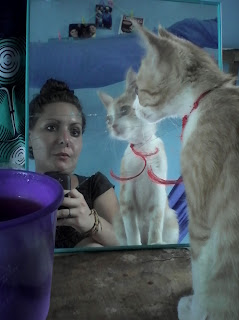 Wowo went missing in February. Daniel called on a Saturday night while I was in Cotonou to break the news. He had been checking in on Wowo daily, refilling his water bowl and making sure he had enough to eat. One day, he just disappeared. Daniel was hysterical, guilt ridden and apologetic. I certainly didn't blame him for the disappearance.

When I returned to village, the town crier went around notifying each house that Wowo was gone. Women stopped by to see if "awi Charloti" had returned. Weeks passed and I gave up hope; wowo was not coming home.

I was fine. I knew that my skills as a pet owner weren't to blame. Wowo had simply wanted a life of freedom. But one afternoon, while sitting under the big shade tree, a man came by with terrible news. He admitted to eating Wowo.

I was aghast. I knew this man. He knew Wowo was my cat. I felt betrayed by my loving village. Then I realized: I don't know what it's like to be hungry (or eat cat for that matter). While I still tell myself that Wowo ran off and is safe in the bush, I'm okay with his demise. Some things are out of my control.

For a couple weeks, I contemplated getting another cat. But, the hot season was in full swing and I had moved my sleeping quarters to a tent in my walled in backyard. I didn't want little claws ripping at the netting. And I wasn't sure whether I could parent another pet.

In the end, the threat of camel spider season got the better of me and I gave in to Daniel's wife's attempts to find me another cat. One afternoon, we walked to the nearby village where her friend had a new litter of kittens. She picked one up and said it was perfect for me. That's how I became a two time cat owner.

We carried the kitten home in a cement sack while he purred and scratched his way out. We laughed as he jumped around in our arms and brought him to my house. For a day, he hid in that cement sack. Then, he started to explore. I named him Mulligan. 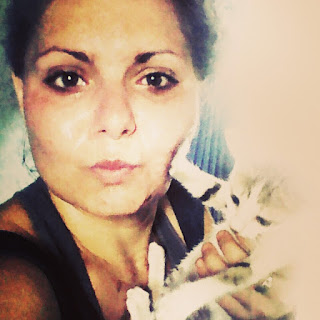 For the last couple weeks, Mulligan has had free range of the house. Unlike his predecessor, I didn't want him to be an indoor cat. I thought that if, one day, he got lost, he would be able to find his way home. The kids played with him everyday and he even took to spending the night at the neighbors house. I thought, "now I truly have a village cat."

But, all good things must come to an end. Mulley is MIA, presumed dead. He hasn't made an appearance at any of the surrounding houses but, luckily, no one has admitted to a little cat snack.  I miss the little guy and wish he was here to chase the lizards out of my living room.

Now, you must be thinking, "I hope she learned her lesson." To be honest, I don't know if I'll get another cat.  It's nice to have company and a reassuring defense against anything that lurks in the shadows. Maybe what I should do is train a lizard to catch spiders and turn cannibal; that won't happen.

Perhaps my house is cursed and I should pay a visit to the voodoo chief. Maybe he has something to say about a cat's nine lives. If anything it would make for a good story.
Posted by Carly Jacque at 2:10 PM